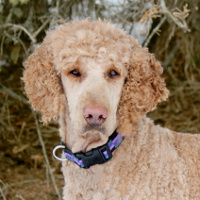 I sure notice a difference in these standard poodle pups. They tend to do well with less firm correction than the doodles. When this litter started nipping I had to only correct each pup once, and there was a noticeable difference immediately.

They do love their people and are very social. They aim to please and are very loyal... and very smart. The remaining females I believe will be 40-50 lbs. Kaiser will likely be 60ish lbs. They'll be ready to go home after July 5.

I shaved a couple of muzzles and it sure changes their looks. I think they look amazing!! I know some people like keeping their muzzle longer (to perhaps mimic a doodle look) and some of these pups could fool people depending on the haircut chosen!

Contact us if you're interested in this beautiful standard poodle litter. We don't plan to breed them again as this litter was intentionally planned to acquire a new sire from Dayo's amazing lineage. 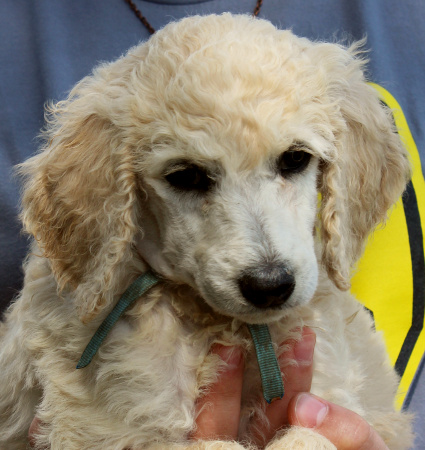 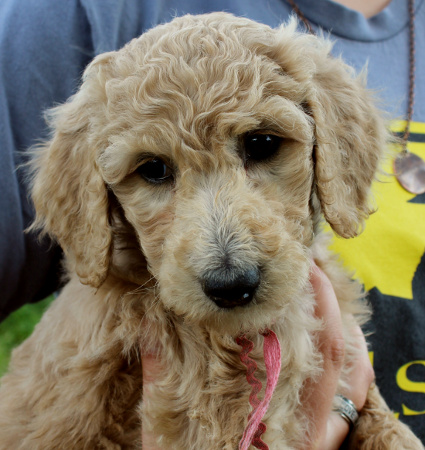 Princess: female ~ pink collar -- Princess has a jovial attitude and a beautiful darker apricot coat. Her coat is not as thick and is a bit straighter right now. -- ADOPTED 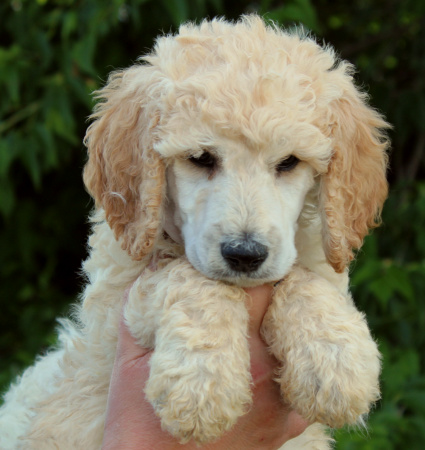 Kaiser: male ~ white/orange collar -- Kaiser is a fun-loving boy, budding with personality. He has a thick curly coat. -- ADOPTED 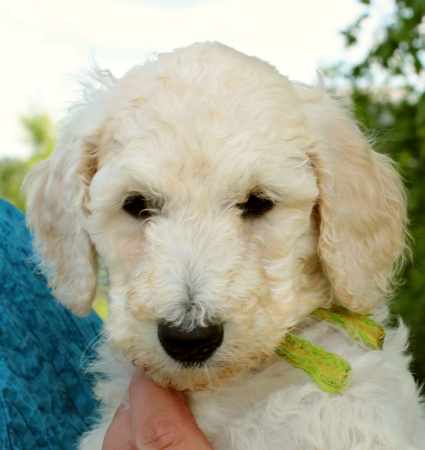 Monarch: female ~ yellow collar -- This littlest girl has got personality plus and has a less curly coat at this time. -- ADOPTED 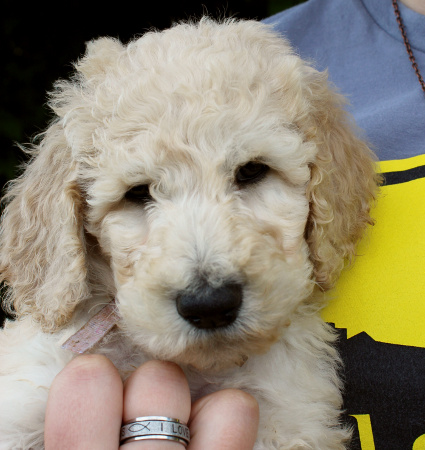 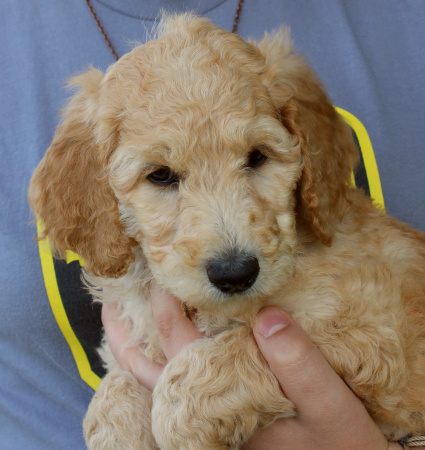 Reese's and Dayo's standard poodle litter is growing up and doing very well. It has been most interesting trying to decide who will be our next up and coming main studly guy. We have ruled out Rex, because he's too big for our program, but the rest of the boys are all in good running at the moment.

It's interesting to see these pups grow and develop their personalities. As you can see by the photos they're a pretty laid back group at this point.

I believe their weights will range from 20-60 lbs, except Rex who will be bigger for sure. Poodles are known to be non-shedding, very smart and make awesome companions. All of these pups will graduate from our puppy program and will have the same great headstart as our other pups.

We bred this litter to find a pup to replace Dayo and don't plan to have another litter of standard poodles. We'll sell these pups for $1000 each including GST.

We're still taking deposits for this litter. They'll be ready to go home after the July long weekend. 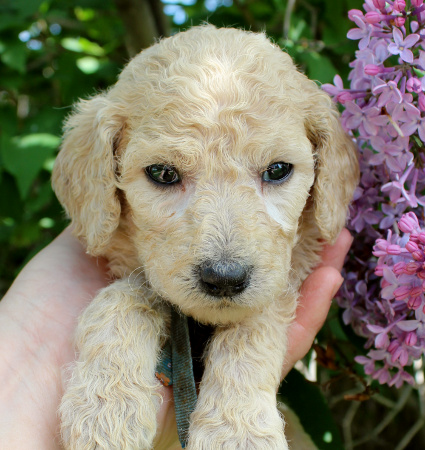 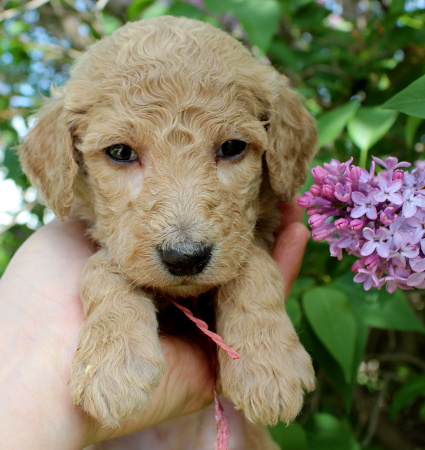 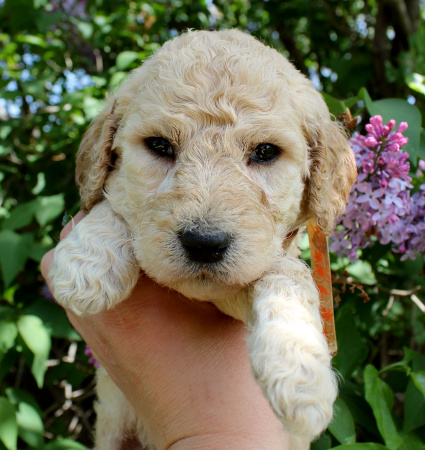 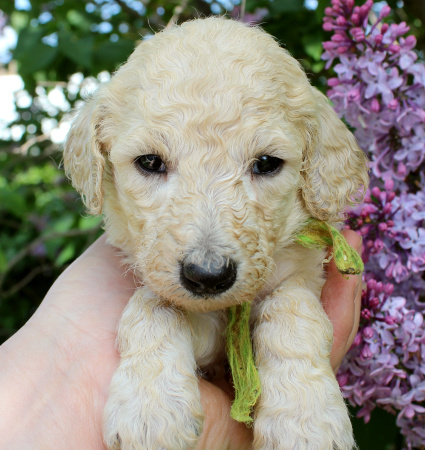 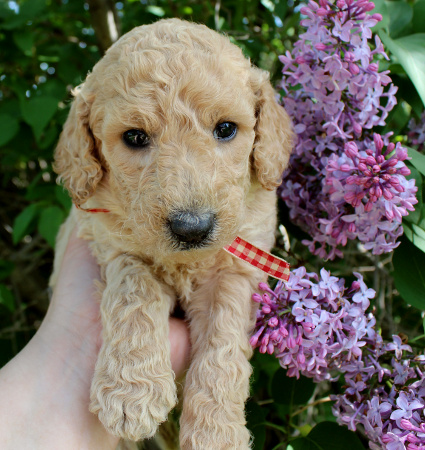 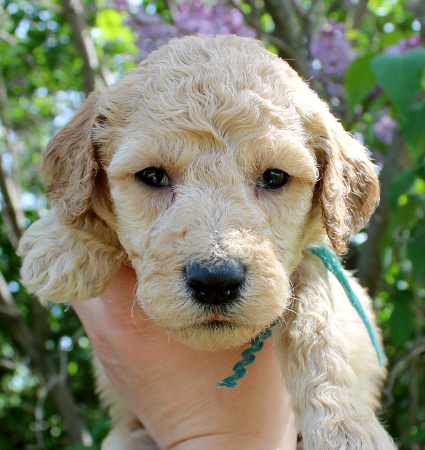 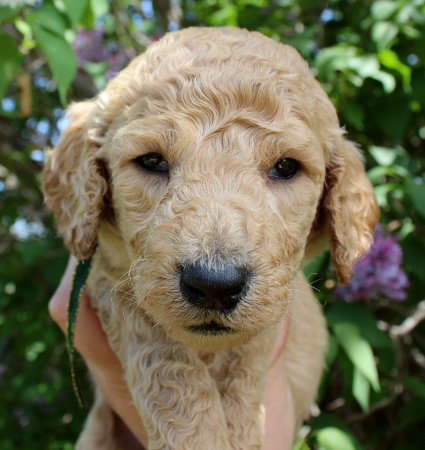 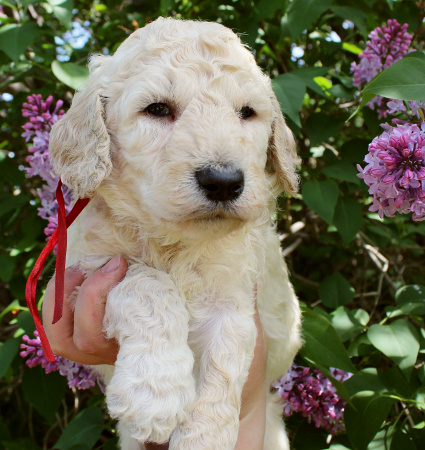 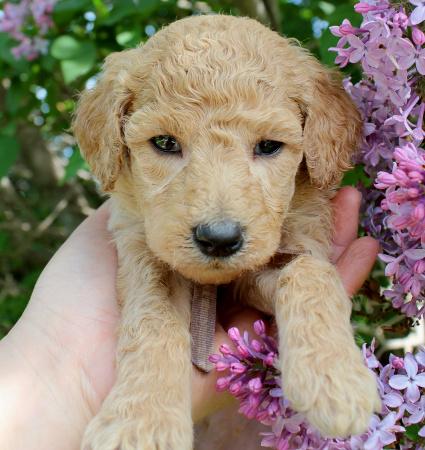 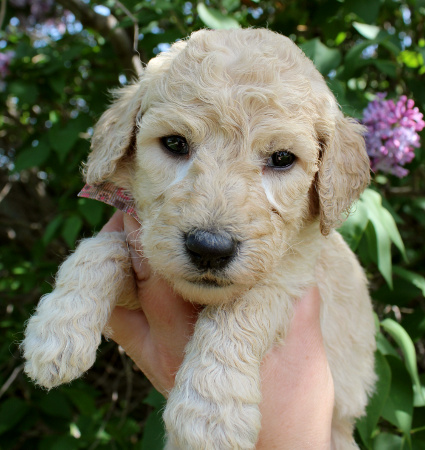 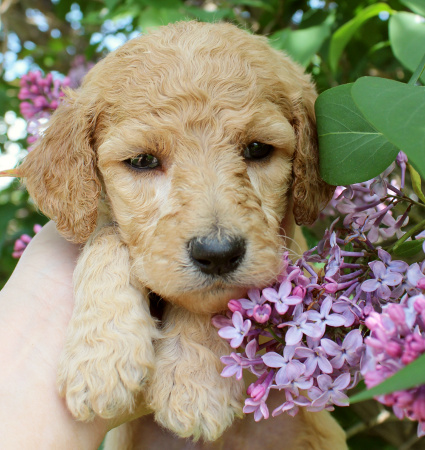 We started our business with Hearty K9s in late 2003, and in early 2004 we bought Dayo as a 4 month old pup. Little did we know at that time what a treasure he would be to us and to so many of you who have the pleasure of owning one of his pups. Over the years Dayo has sired 27 litters for Hearty K9s. We have had so few health issues with his pups over all these years, and with such great-tempered offspring we now find more people putting in requests for a "Dayo" puppy (often they have met his kids in the dog park or already own one!).

Several years ago I started to inquire about how long the old boy would be good for breeding. The answers were vague and varied, but I'm told that other dogs like Dayo could be finished when they're 7, or may still be good until age 14. Dayo will be turning 10 in November and apparently he's still doing very well, as in this 28th litter where he gave us 11 standard poodle pups!!

One of the 4 boys in this litter will take his throne one day! This is our reason for this litter -- to continue the great lines we have in Dayo and hope that one of these 4 boys will live up to taking Dayo's place in a couple of years!

We've been on the lookout for many years for a standard poodle that would be a good match for Dayo. We chose Reese for her gentle, quiet, relaxed nature, good health, and her solid apricot coat. She has great snuggle qualities, is keen and very kind, and weighs in at 55 lbs. If we can find a quality golden retriever sire we hope to have more goldendoodle litters from her. Between Reese's enduring calm character and Dayo's jovial spirit, we look forward to getting to know their litter as the pups grow. 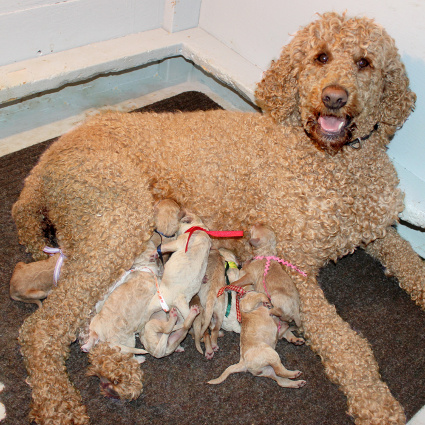 Now for the announcement, after such a long intro...
On May 6th Reese gave birth to 11 beautiful standard poodle pups! If Dayo had buttons, they would be popping! There are 4 boys and 7 girls who range in colour from light cream to a medium apricot. There are a couple of silver beige girls, (looks like highlights) as well.

My guess is that the pups will range in size from 40-60 lbs. I'll keep their tail natural (they will not be docked). The pups will not be registered and will be sold for pets only at $1000 including GST. This litter will be ready to go to their new homes after July long weekend.

We went with a royal theme as we wait to see who will be heir to the Dayo throne  :)   The boys are: Caesar, Kaiser, Baron, and Rex, and the girls: Empress, Monarch, Duchess, Lady, Princess, Baroness, and Majesty.

I'm now taking deposits for this litter. See how our choosing process works on FAQ, and contact me if you're interested in any pups in this litter. 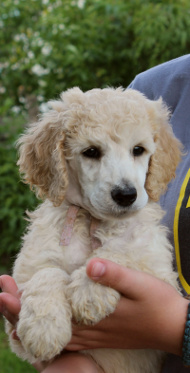 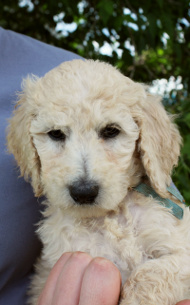 Baroness before being muzzled 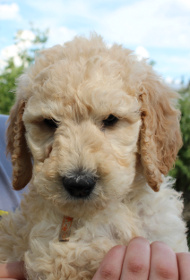