Josey's Carol is looking for a new home ADOPTED
January 14 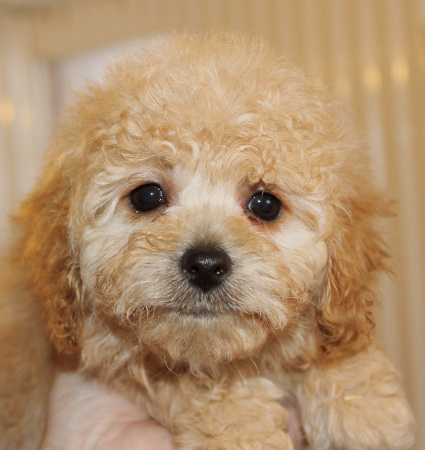 Carol has a beautiful non-shedding, big coat for such a little girl. She is not shy and is playful and fun loving. This little girl likes to snuggle and is social, but still plays well on her own. My guess weight for her is 14-18 lbs, making her the smallest of her litter.

Please contact me if you're interested in adopting Carol. She will be ready to go home on January 16th.

Only Carol remains available. Jack Frost and Goodie are chosen so far and two more people are coming this week to choose. I have three left available for adoption.

Josey's and Ryder's litter of 7
December 17

These two make the sweetest looking pups! They look like little munchkins compared to other litters. Last year their pups ranged from 14 lbs to 40 lbs so we'll see what becomes of these!

These pups will be ready to go to their new homes on January 16th. I may have room for one more deposit on this litter. I won't know who will be available until after December 13 when folks have chosen which pup they'll take. 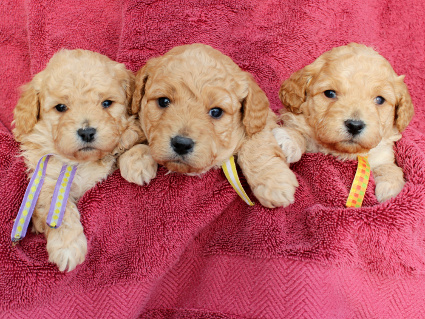 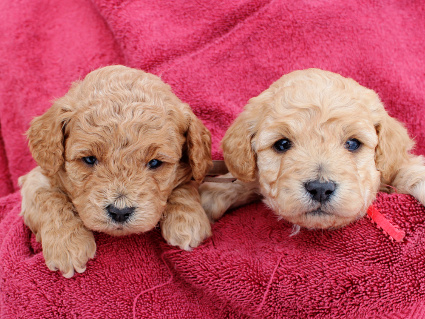 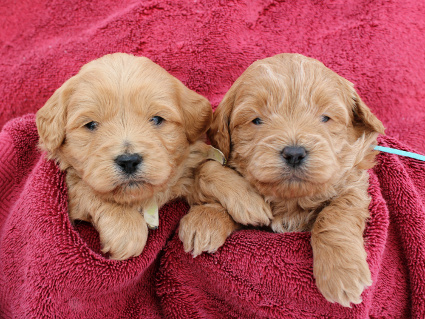 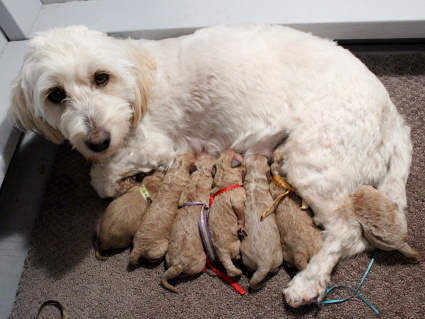 As we watched and waited for Kindle to have her pups I got a text from Dean. "The wrong dog had pups!" :)

Josey had spent the majority of her days in the house with Ryder the last couple of weeks but if I was in the house for long periods of time I would put them both in her nursery in the barn. Ryder was doing very well as a coach to Josey, as he is a 'modern sire,' who actually witnesses his pups being born... well at least the first few.

Dean whisked him away when he saw Josey had already delivered a few pups that afternoon of November 20th. By 7pm she was all done. From what Dean had witnessed, Ryder was a very good Daddy and 'studly' to Josey.

This is a very petite litter and are the smallest pups we'll likely have this year... but unbelievably, Josey had 7 pups squeezed inside that little 20 lb body of hers.

There are 4 boys, and 3 girls. We named them after some words from "The Christmas Song" (Chestnuts Roasting on an Open Fire).

The boys are: Chestnut, Jack Frost, Eskimo, and Goodie, and the girls are named Carol, Glow and Wish.

They'll likely all be non-shedders and will range in size from 14-35 lbs. These pups will be ready to go home mid-January. I'm now taking more deposits on these little sweet hearts. Contact me if you're interested.