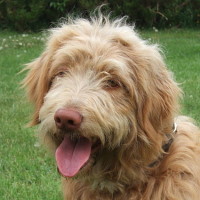 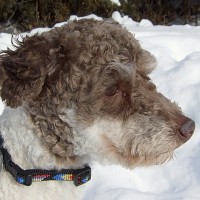 Tex is not available for adoption!
October 8 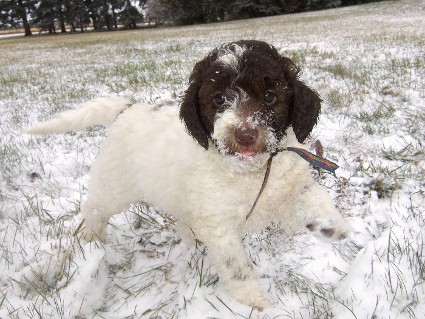 Tex gets his first taste of winter... HE LIKES IT! -- ADOPTED

Now here's a nice little fella with a big Texas mustache ready to win your heart.

Tex is a Parti goldendoodle boy with a non-shedding type of coat that will likely grow to be around the 30 lb mark. He likes to carry things in his mouth, is active and plays well on his own and with others.

We get a kick out of his antics and so will his new family. He'll be ready to go home the weekend of the 18th of October.

Here are Lacy's and Rumba's pups at one month old. They're growing like crazy and doing really well. Lacy is a super Mom!

All of these pups are now spoken for at this time. I may take more applications to be on the 'just in case someone backs out list' if you're willing to wait for upcoming litters.

These pups will be ready to go home the October 18th weekend. Folks will be coming to choose which one they want around the October 3rd weekend. See the choosing process on the FAQ page. 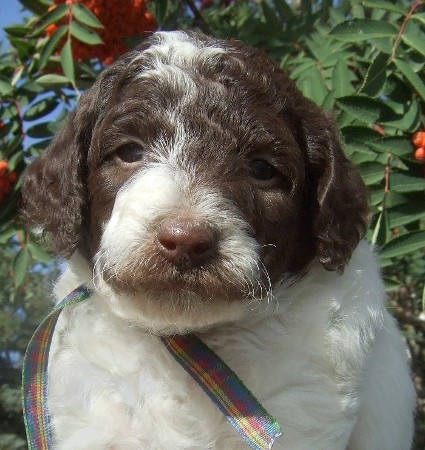 Our Texas(n) boy has a cool mustache, what fun! (plaid collar). -- ADOPTED 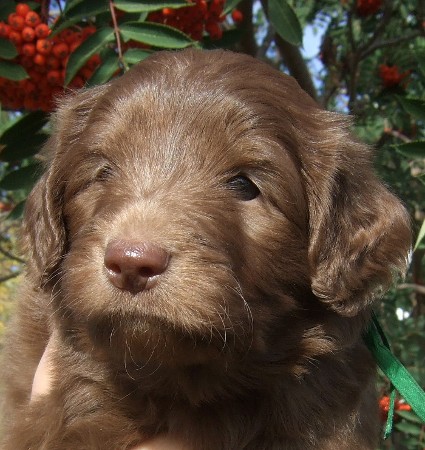 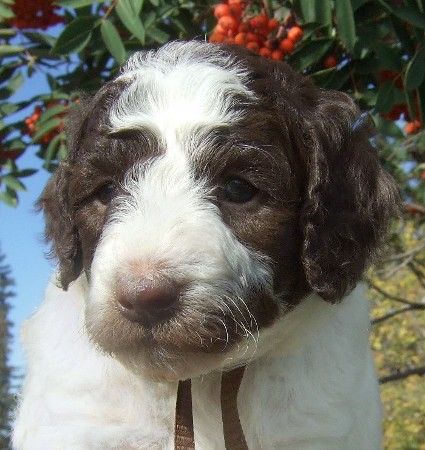 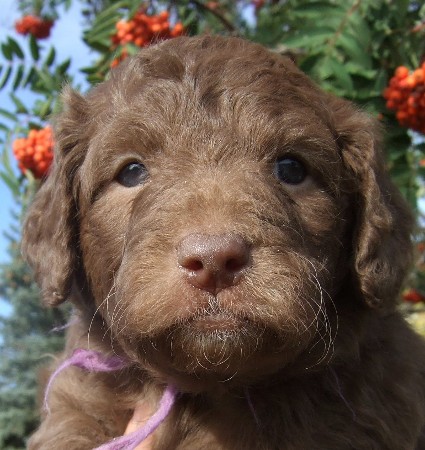 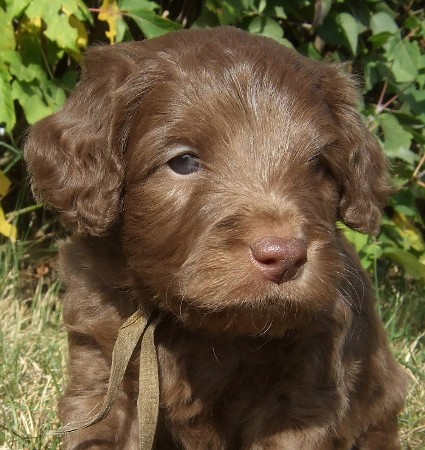 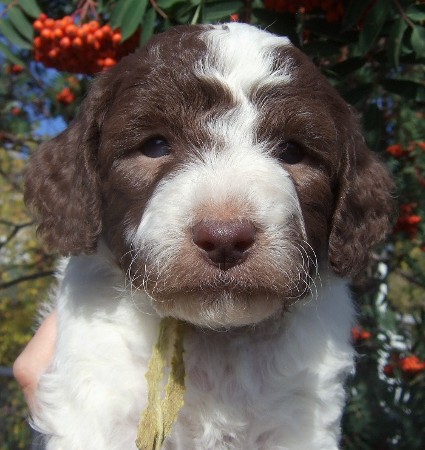 Galloway is a mostly white Parti girl with brown on her face and at the base of her tail (yellow collar). -- ADOPTED 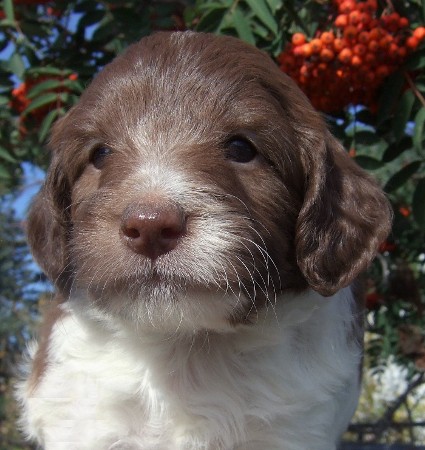 Guernsey has a more even distribution of brown/white as most of her back is brown. Her brown will likely fade to caf�. -- ADOPTED 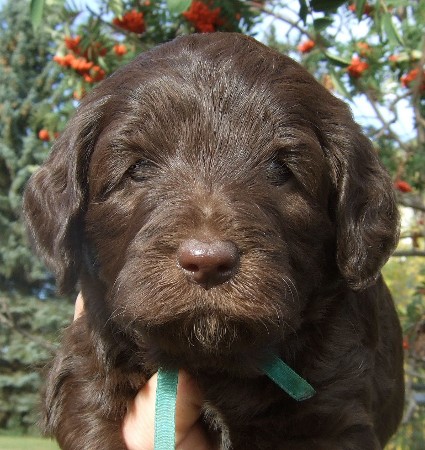 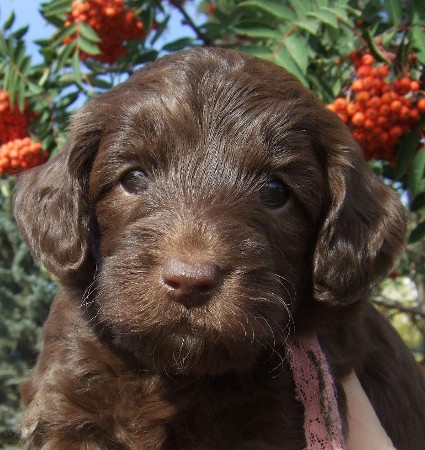 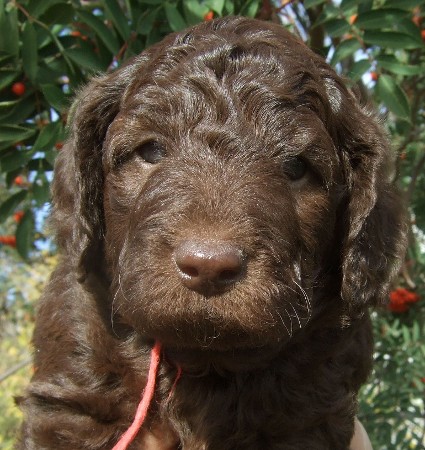 Saler is a big boy with a red collar. -- ADOPTED 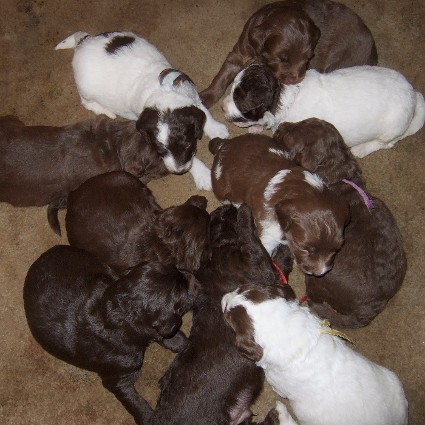 ...all growing and as cute as ever!

Lacy's litter will be ready to home the October 18th weekend. 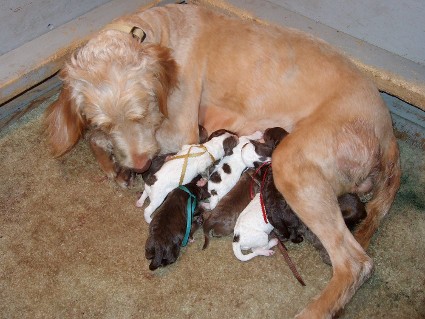 Lacy delighted us with a litter of 10 beautiful babies on Sunday. There are 5 boys and 5 girls -- 4 are parti and 6 are chocolate! There is a lot excitement around here and I just can't get enough of these rare colours! Some are a lighter brown and will likely turn into caf�s.

The theme for this litter is "Breeds of Cows". In trying to describe a parti, I often explain that it's a holstein look... although no one got that name. Here are the names we thought of for this litter.

The boys are: Brahman, Angus, Texas Longhorn, Dexter and Salers.

The girls are: Hereford, Jersey, Guernsey, Brown Swiss and Galloway.

Lacy is a very good mama and Rumba... is... well, doing the rumba to celebrate!! My guess on the weight range for this litter is 20-35 lbs. They'll be ready to go home the October 18th weekend at 8 weeks old.

If you're interested in getting in on one of these sweet F1B mini/medium goldendoodles, please contact us.