A final update on Nite Nite's last litter
May 6

Both Romeo and XnOs have been adopted.

This ends a chapter for Hearty K9s with Nite Nite's last F1B litter. Nite Nite had our first F1B litter on November 7, 2005 with Jag and produced many a fine pup since then with her four litters. Her and Dayo teamed up to produce our only silvers.

Valentine went home with her new family today, leaving just XnOs and Romeo who are looking for homes.

This is Nite Nite's last litter. After her last pups find homes she'll be spayed and will retire. Contact us if you are interested. 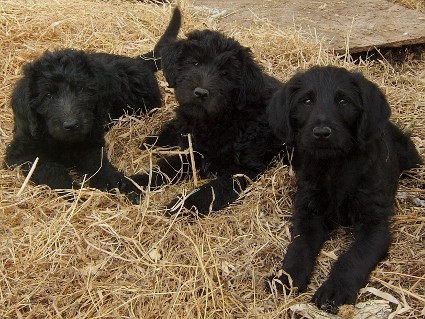 XnOs, Valentine and Romeo relax in the shade -- all are ADOPTED

This weekend both Flirt and Juliet found homes. XnOs, Valentine and Romeo are still available for adoption. They're ready to go to their new homes.

XnOs is a social butterfly. She loves to be with people and is a friendly girl. She has filled out more this last week and she may be a bit bigger than I originally thought... but it's still a wait and see game. She'll likely be around 55 lbs. Her coat looks like she's going to turn silver and will likely not shed.

Valentine is a beautiful, friendly puppy. She plays well on her own and would suit a family that's working. She is not very silver yet but we can still see a change of colour in her paws. She has a more stocky body and will likely not shed as well. My guess adult weight for her is 60-65 lbs.

Romeo, oh Romeo... what a boy! This little character is a gentleman and tonnes of fun. He likes to play with you, but really does well playing on his own too. He's just a well rounded pup. My guess weight for him is still around the 50 lb mark. He has a flatter coat and he will likely be a moderate shedder.

NiteNite's pups are growing and maturing into some beautiful well-balanced pups. We have 5 remaining from this litter and here are a few of their latest photos. I had the priviledge of having my daughter Sara's help today... we had a lot of fun! 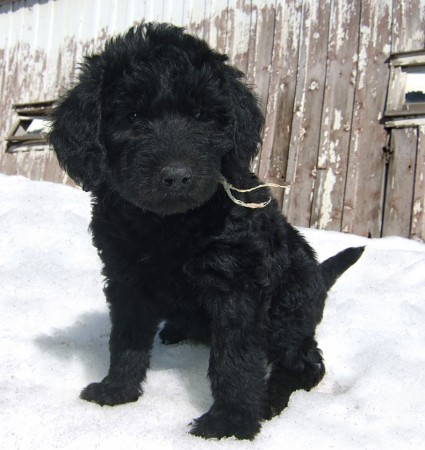 Xn0s is a social girl, enjoys a good play and is nicely interactive. She also has a non-shedding type coat and will likely grow to be around the 50 lb mark. -- ADOPTED 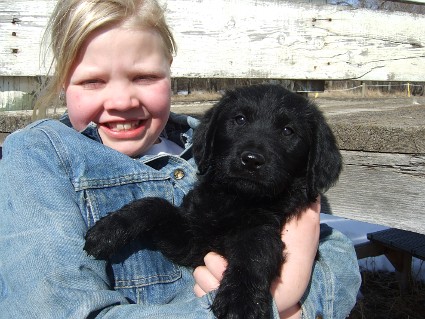 Romeo is a goofy, fun-loving, social character. He's always making us laugh with his antics. His coat is flatter and he will likely end up with a loose wave, but will be a shedder. My guess weight for him is about 50 lbs. -- ADOPTED 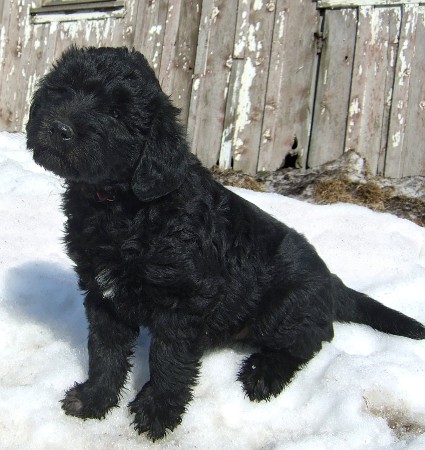 Valentine is the up-and-coming silver dog! Her paws are showing it more than her face, but in about 8 months to a year she'll likely be completey silver. Her coat is also a bit straighter, but still soft, and will likely not shed (or very little). My guess weight for her is the 65 lb mark. -- ADOPTED 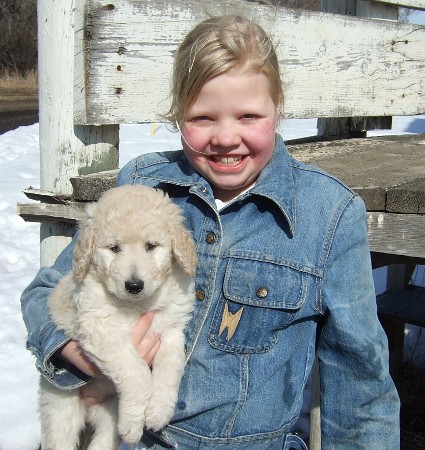 Flirt is the last cream female available. She has a quieter nature and is not really bold yet... but she is coming out of her shell. She loves to go for walks and enjoys her snuggles. Her coat will likely not shed as an adult. Guess adult weight is about 65 lbs. -- ADOPTED 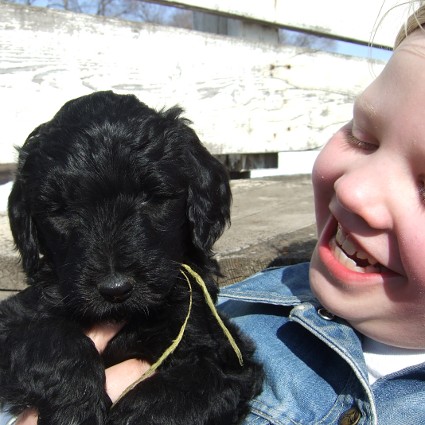 Juliet is a gentle-natured, goofy girl. She was very quiet and timid but has turned a new leaf and is taking life by the horns.... she's so fun to be with. Juliet is the smallest girl and will likely be around the 40 lb mark. Her coat is not as curly, but still soft. She may shed some, but not a lot is my guess. -- ADOPTED

Valentine has won the silver! Usually one of Nite Nite's and Dayo's pups turns silver and Valentine is showing signs that she's the one!

The rest of this litter is still available. There are some really neat pups available varying greatly in temperaments, sizes, colours and coats.

Contact us if you are interested in Nite Nite's litter finale... after this she'll be spayed and will retire.

Nite Nite's and Dayo's pups are doing really well and are 4.5 weeks old already! They're starting to move outside of their whelping box now to go to the "bathroom", which is a pile of wood chips in their nursery room. I would suspect that if the weather stays nice, in a weeks time, they'll be venturing outside.

They're loving the mush of puppy food they get and in a few days will be crunching the hard stuff. There's a big variety in this litter for sizes and coats. The pups' personalities are just budding and it's fun to watch them develop and grow.

I'm still taking deposits on this litter. They'll be available to go home for Easter. 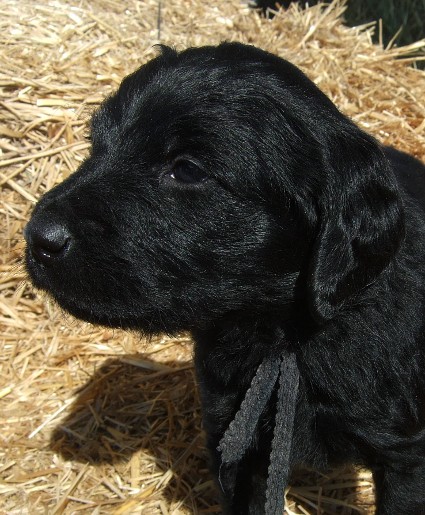 Romeo has a straighter coat at the moment. He's enjoying the attention of being the only boy. -- ADOPTED 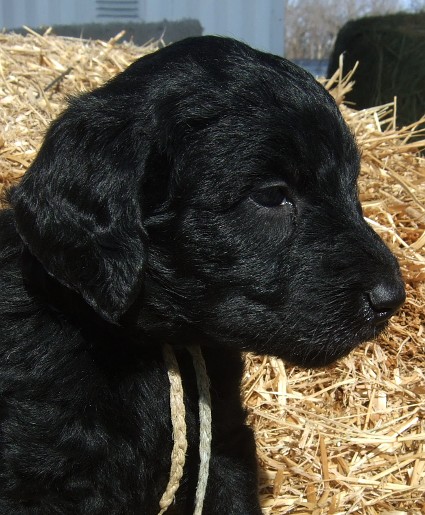 XnOs has a wavier coat and is a medium size in the litter. -- ADOPTED 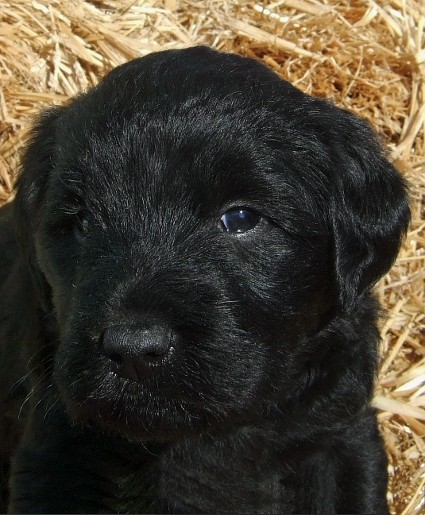 Valentine is a bigger girl with a straighter coat at the moment. -- ADOPTED 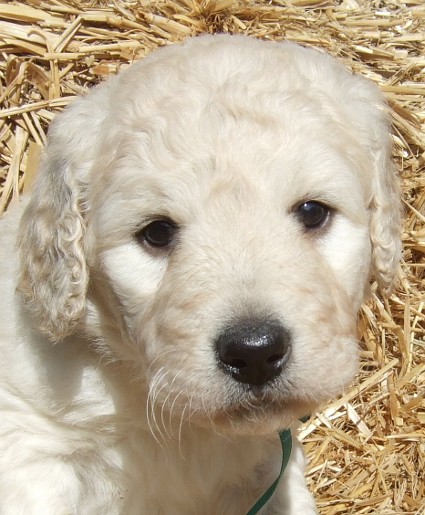 Flirt is the medium-sized one from the cream girls. She has a wavy-curly coat that will likely not shed. -- ADOPTED 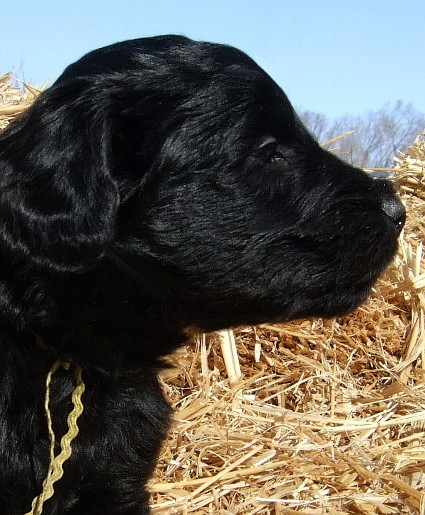 Juliet is the other of the 2 smallest girls. She has a wavy coat. -- ADOPTED 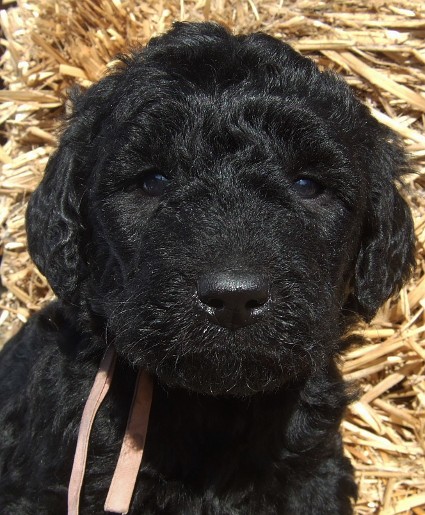 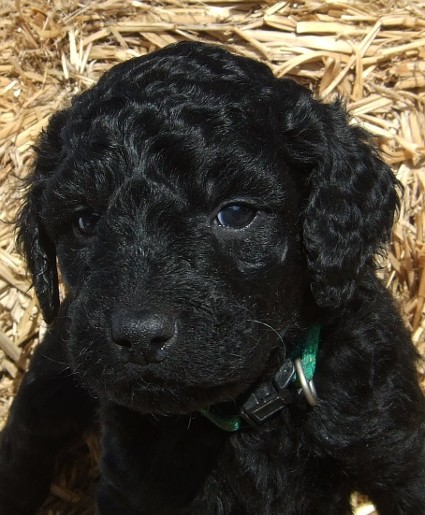 Babe is a small girl; cute and curly. -- ADOPTED 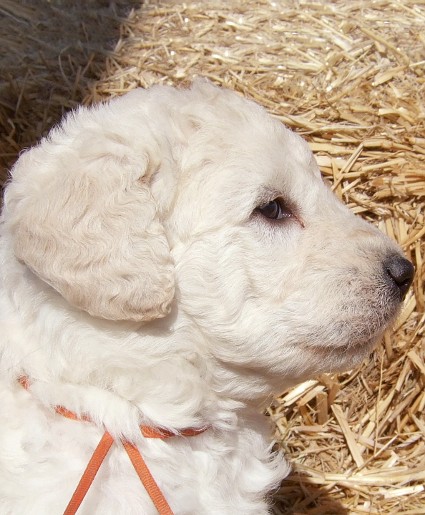 Crush is the biggest cream girl, with a curly-wavy coat, and has shown to have a calmer demeanor... so far. -- ADOPTED 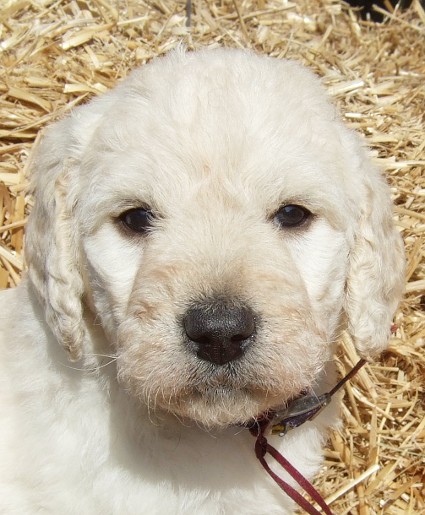 Spark is the smallest of the cream girls and has a curly-wavy coat. -- ADOPTED 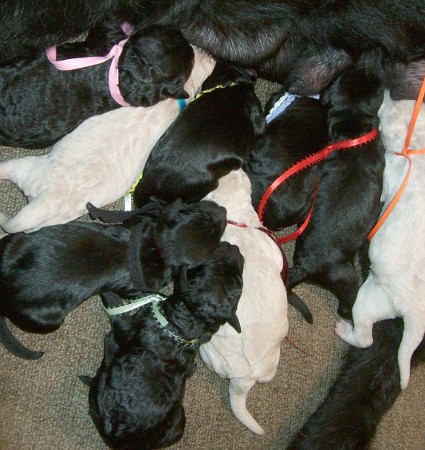 Nite Nite's and Dayo's last litter together was born on Valentine's Day morning (Nite Nite retires after this).

Lots of excitement filled the house as we decided on names for this special Valentine's day litter. As the morning progressed we decided to check out how many boy and girl names we needed. We were surprised to see there was only one little black boy. He was surrounded by 8 sisters, 3 cream and 5 black, one or two of whom may turn silver.

We named the boy, Romeo, and the girls are as follows;