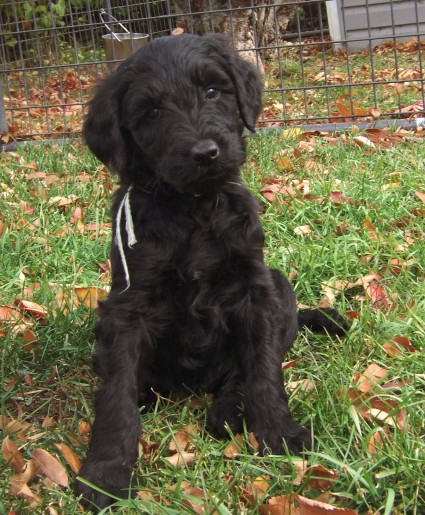 Kellsey has a soft personality. She is attentive, goofy, and has Dayo's head tilt; which is cute beyond words. Her coat is soft, a bit flatter and with a nice gentle wave.

She may shed some, but if she does, I don't think it will be much. At the moment my guess weight for her is 35 lbs. The way she presents herself she would be pick of the litter for me.

Personally this is what I like to see in a pup, but everyone has their preferences. Now, if there is anyone out there who is interested in Kellsey please contact me. If not, I may just have to keep her! ;-)

Nite Nite's sm�rg�sbord of pups are a popular item!
September 22

MacDonald, Timmy, Smitty, Huckleberry and one of the black little girls (not chosen yet) have been adopted.

Still available are the girls: Kellsey, Montana, Moxie and Olive (although one girl is spoken for and will be chosen next weekend).

If this litter doesn't wet your appetite to have a pup, who knows what will! NiteNite's sm�rg�sbord of pups are amazing. They seem to act like a very large family.

There's always something going on. For instance; a few will be wrestling, some diving in mush in the dog dish, others crunching the hard core kibbles, a few sleeping in a corner. Then there are those at the watering hole who think the water dish is a pool!

They're a blast to watch and it's exciting to see how they're blossoming in their development and personalities.

There are 5 black females and 1 cream male left in this litter. They'll be ready to go home October 13th.

Some people have contacted me from Nite Nite's and Dayo's litter from last year and they said the pups have not grown as big as their parents. Some stayed as small as 40 lbs and one of the bigger pups was only 55 lbs.

I do believe there are 2-3 girls that may stay that small again this year, but we will see. This is a great bunch of pups... lots of variety in coats, size and temperament.

Two thirds of the cream boys have been adopted but have not been chosen yet. 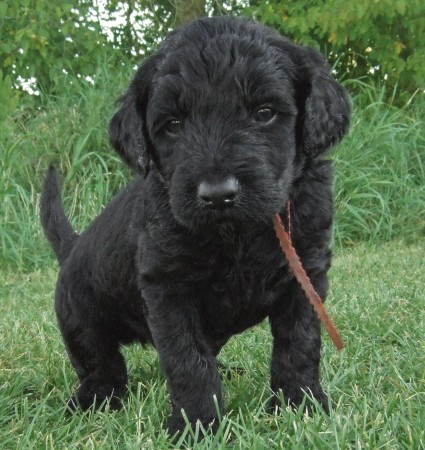 Arby is a animated talker and is going to be a running partner and companion to a athletic cat called Wheels. His new name: Axle. -- ADOPTED 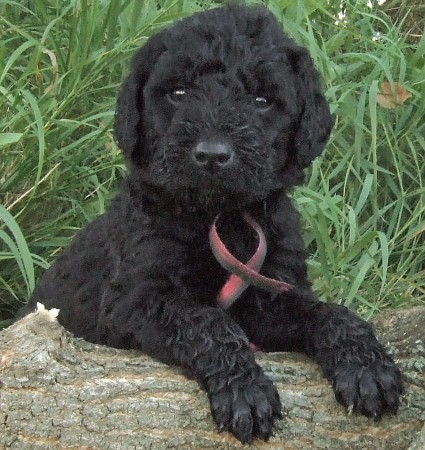 Boston is a personable fellow and won the hearts of a family from Fort McMurray. -- ADOPTED 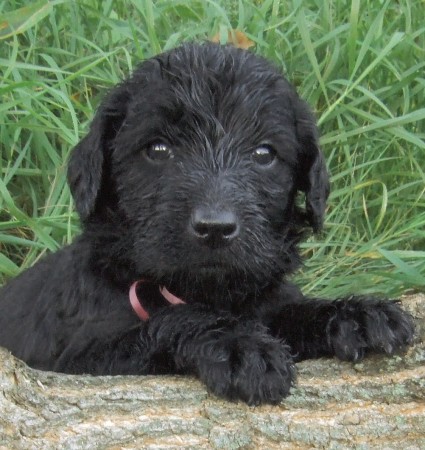 Huckleberry is the biggest girl. She has a wonderful coat and a sweet personality. -- ADOPTED 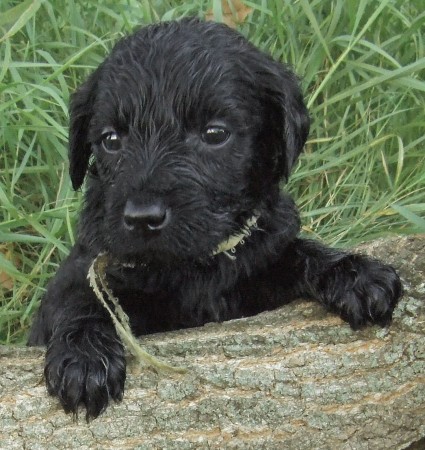 Kellsey is one of the littlest girls. She has a soft personality and is a nice cuddler. -- ADOPTED 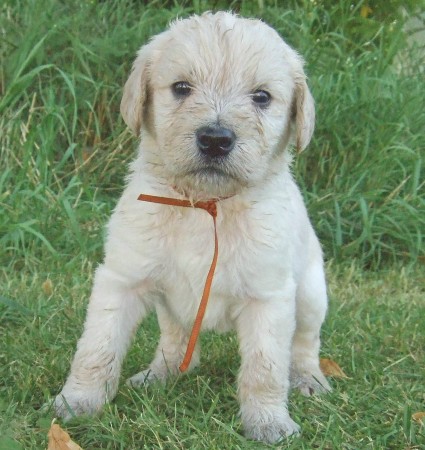 MacDonald has a soft, straight coat and has a personable "wanna be with you" personality. -- ADOPTED 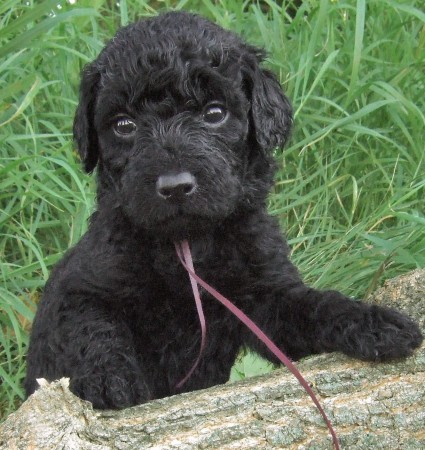 Montana is another of the smaller girls. She is a feisty little thing and is loads of fun. -- ADOPTED 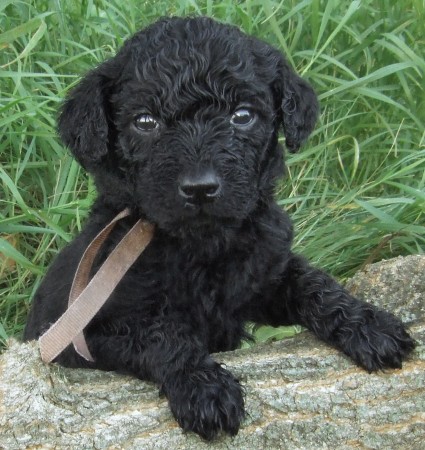 Moxie is the smallest girl, but oh so sweet. She really likes to dive into her mush at the moment... just in time for the photo shoot. -- ADOPTED 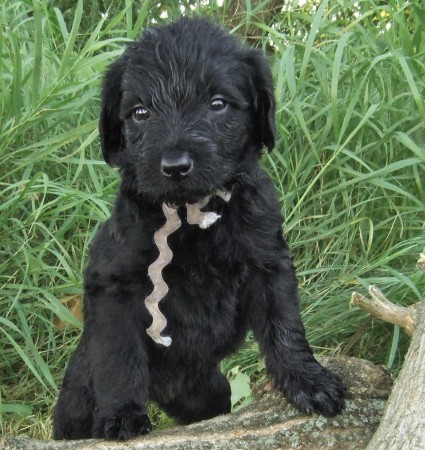 This cute little girl, Olive, likes gardening and we believe she is ½ Italian as she asks for pasta on a daily basis -- ADOPTED 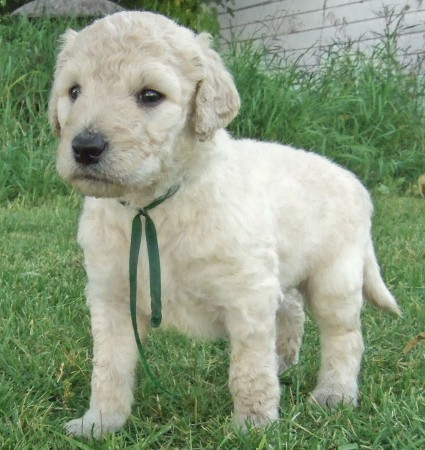 Smitty is a handsome boy, has a nice wavy coat and comes with a big boy attitude. -- ADOPTED 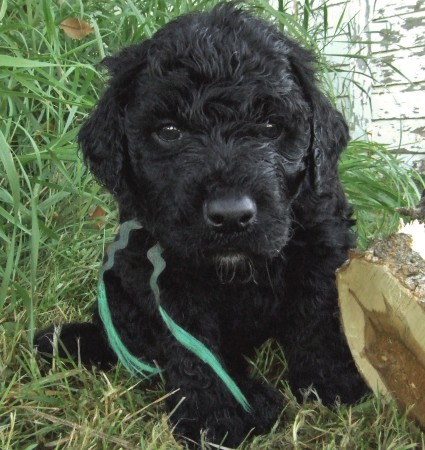 Tony is a fine, soft spoken boy who is ready to burst into a flavourful character. -- ADOPTED 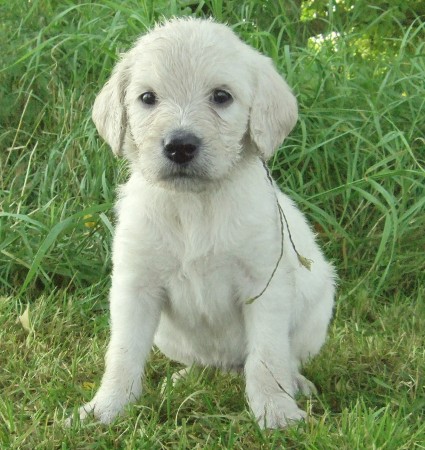 Dairy Queen is going to be a real little sister to Dieter (who is Lego from last years litter). -- ADOPTED 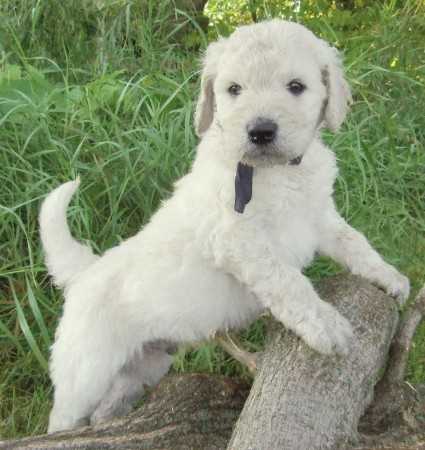 Timmy is a handsome fellow with loads of personality and a wonderful coat. -- ADOPTED 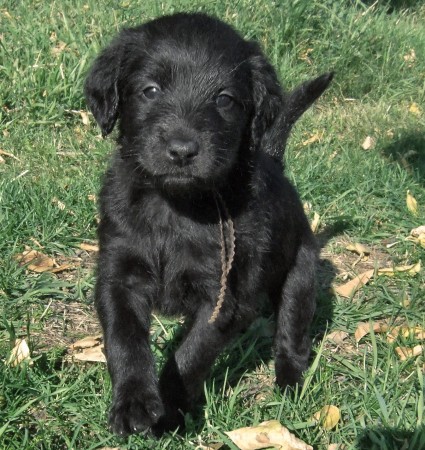 Nite Nite continues to amaze me with her mothering skills. The pups are growing so fast they've overtaken the whelping box space. Nite Nite has separated them to help make more room and create less competition at the milk bar.

So far the cream female and the 3 black males have been spoken for. What remains are 6 black females and 3 cream males at this point in time. If you're interested in this litter or have any questions, please contact me.

Also please check out Luna (was Kite) from Nite Nite/Dayo's 2006 litter on Yesterday's pups. She's the first silver doodle we've bred. She started to turn silver around her eyes at about 6 weeks old and now look at that girl!

There may be one or 2 in this litter. We will see.

Nite Nite delivers, and how!!!
August 18 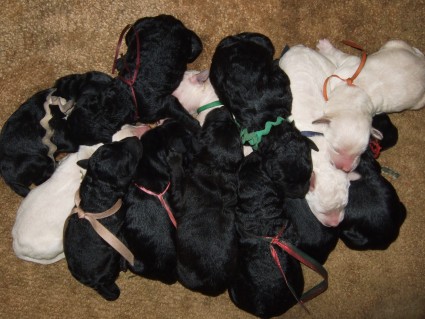 Nite Nite is developing a scary mathematical system... her first litter had 3 pups, the next litter 10 and this time 13!!!!! WOWZERS!!!!

That's a record here at Hearty K9s and one that we hope no one breaks! This is a huge litter and will need extra TLC from us as we supplement with bottle feeding.

All the pups are looking strong and healthy at this point in time so we will do our best to help out Nite Nite. Keeping her well nourished is the main key, then supplementing the pups when necessary.

There are 9 beautiful blacks (some may turn silver) and 4 creams. There are 3 boys and 6 girls who are black/silver and, for the creams, 3 boys and 1 girl.

The theme with this feast of pups is restaurants. The boys are Arby, Boston Pizza, Tony Roma, Smitty, Tim Horton and Macdonald. The girls are Moxie, Kelsey, Huckleberry, A&W, Olive Garden, Montana, and Dairy Queen.

Hmmmm... they make me work up an appetite. I wonder if we'll be eating out more these next 8 weeks? 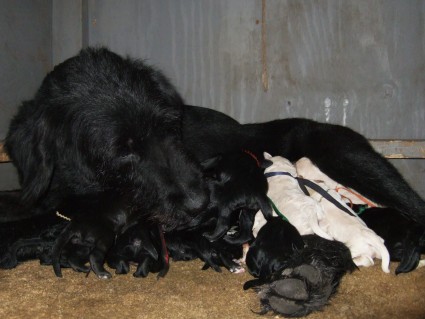 These pups are not all spoken for. They'll be ready to go home October 13th at 8 weeks old.