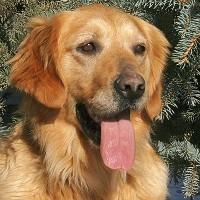 Minnie and Johnny (from Ripley's) litter have been adopted by two families whose wives are sisters. Both have lots of experience with dogs and lots of love for each other... it was nice to see.

Tarzan was a very popular pup this weekend. No less than three families wanted to adopt him (sigh!!).

So what did we do? All of the families qualified as a match for him so our choice was decided by who placed their deposit first. It's a difficult thing to do when you think of how hopeful all of the families were. This just goes to show why we need this kind of policy in place.

Three pups with photo ops
May 15

Here are the photos of Nia's last three available pups. 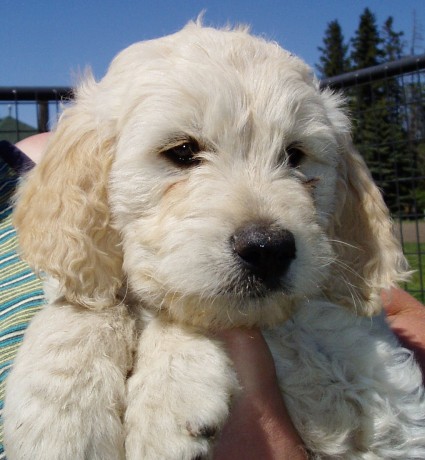 Tarzan is a very light-coloured boy who is social, easy-going and loves to play (guess wt. 75-85 lbs). -- ADOPTED 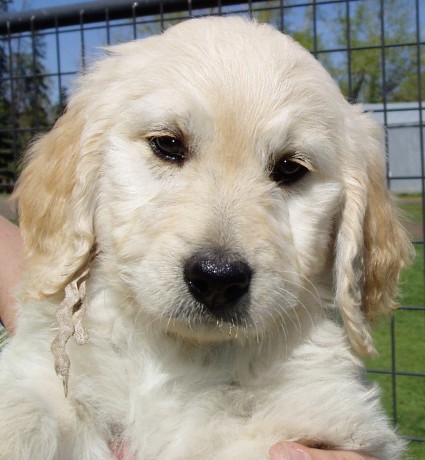 Minnie is a quiet little girl who has a great sniffer nose and loves to cuddle (guess wt. 60-70 lbs). -- ADOPTED 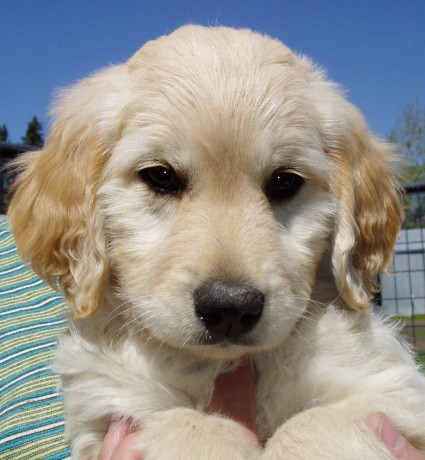 Chip is a handsome fun character. He comes running to his name already and has a calm disposition (guess weight, 73.4 lbs ;-) -- ADOPTED.

Only three pups remain waiting to find new homes
May 14

Tinkerbelle, Mushu, Mulan and Jane are now all adopted! Chip, Minnie and Tarzan are still waiting to meet their new families.

A couple more of Nia's pups have been adopted but will know after the weekend which ones have been choosen. 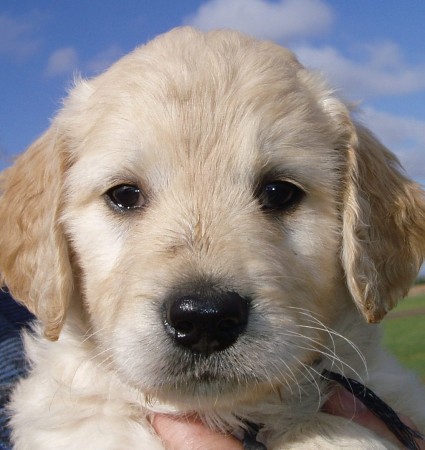 Chip is an interesting fellow. He's playful, smart and attentive to people but plays well on his own too. -- ADOPTED 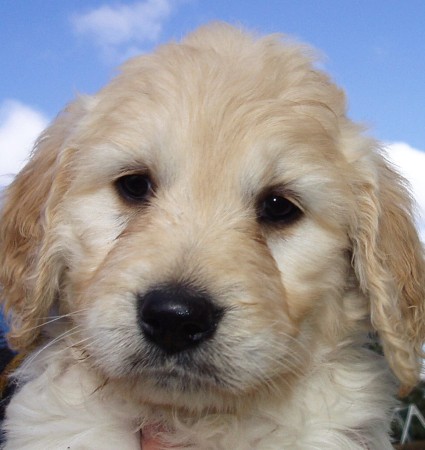 Jane is a little sweetie, good natured and softer-coated. -- ADOPTED 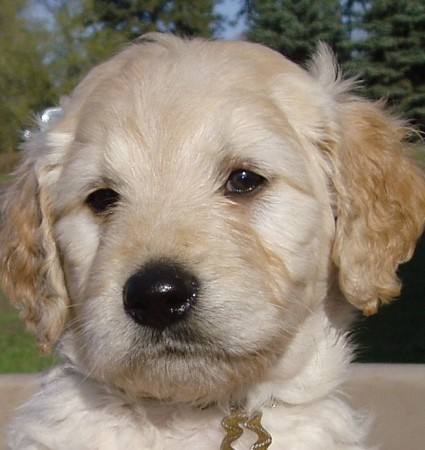 Mulan is a very playful girl, has lots of character and is one of the first to come and greet us. -- ADOPTED 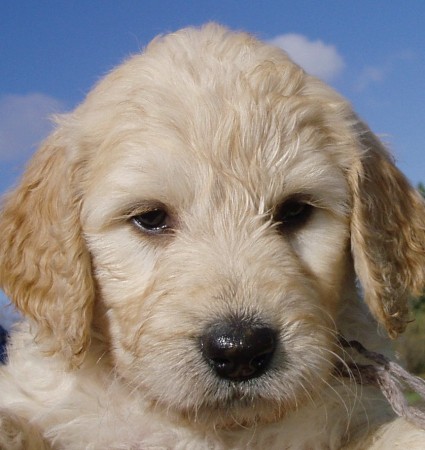 Minnie is a gentle soul, cuddly and sweet. Kind of reminds me of my favourite Aunt Minnie. :-) -- ADOPTED 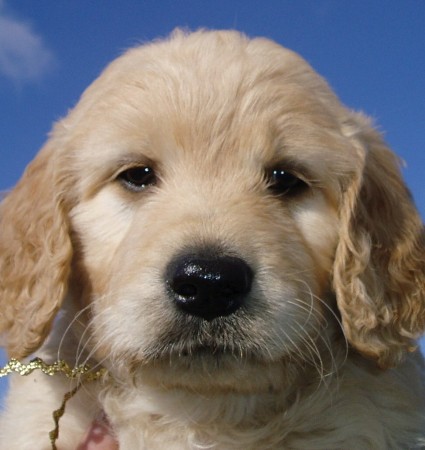 Tinkerbelle is an out-going, playful girl. She has a darker coat and bigger build. -- ADOPTED 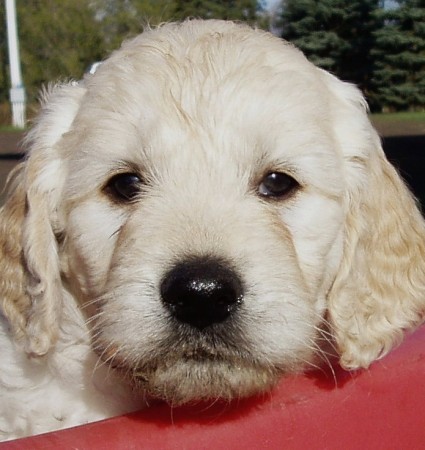 Tarzan is a big hit around here. He is very light coloured, loves to play and is just plain sweet. -- ADOPTED 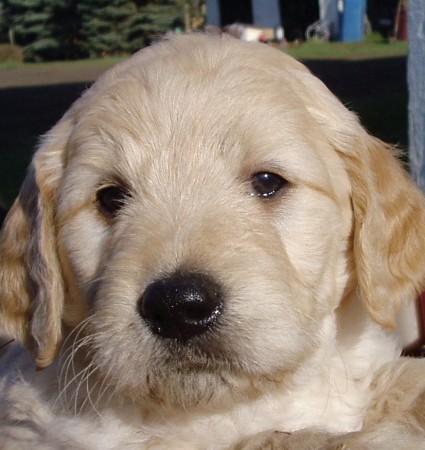 Mushu is a quieter soul, plays well on his own but enjoys his snuggles too. -- ADOPTED 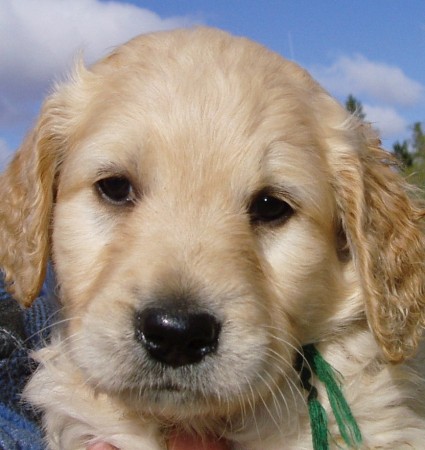 Goofy (now "Jimmy") is going to live in Calgary and gets a two year old boy to call his own. -- ADOPTED 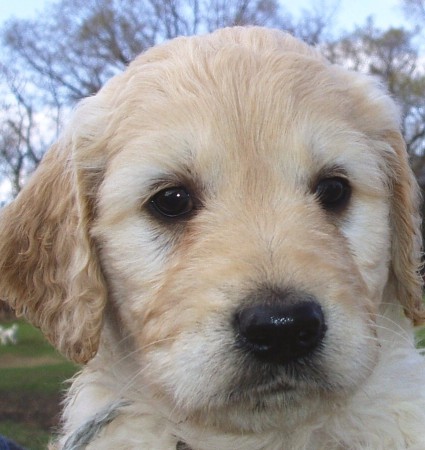 Dale is going to live with a family with allergies in Edmonton. -- ADOPTED 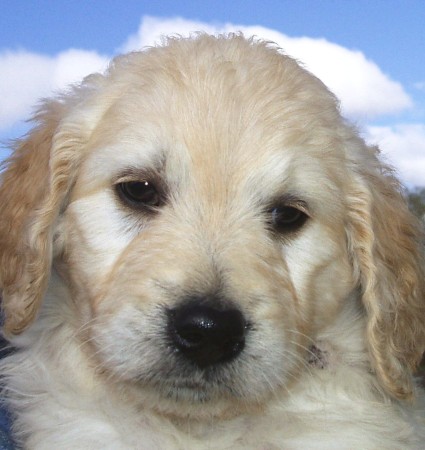 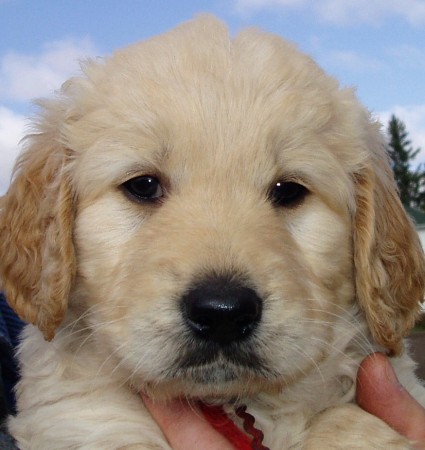 Mickey is moving North to Edmonton to cheer on the Oilers! -- ADOPTED 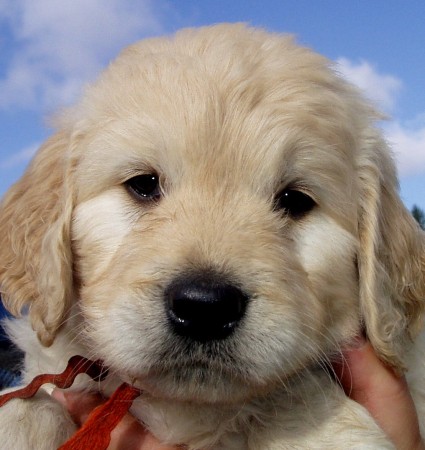 Pluto (now "Moses") gets to learn how to be a memory-aid dog to help those with short term memory loss. -- ADOPTED

Pluto's training will take approximately 3 years. The trainer has never trained a goldendoodle before... I'm excited to know how quickly Moses will catch on. He'll learn to recognize numbers, letters and objects. After his training he'll help his person to find the exit when in a large store or mall, "find the car" when in a parking lot, or "find the keys or remote" when at home. You know some days I feel I could use one of these myself!!!

The trainer, John, is phenomenal and I would call him a "dog whisperer!"

Five adoptive families came out today to choose their pups from Nia's litter. These pups have found new homes:

Nia's pups are growing and maturing well. Their personalities are still evolving and in a couple of weeks there will be more to say about each of them.

The people who made the first deposits are coming to choose which pup they want on April 29th... then we'll update who is left after that. 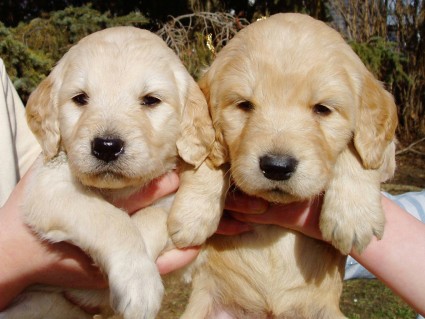 Ariel is a smaller, quiet, sweet girl. Tinker Belle has not lived up to her name... she's the largest girl. 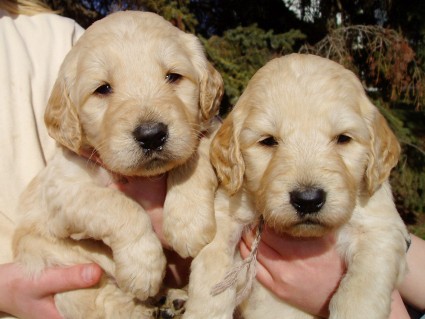 Mickey is a great strong character. Minnie is a meek but sweet girl. 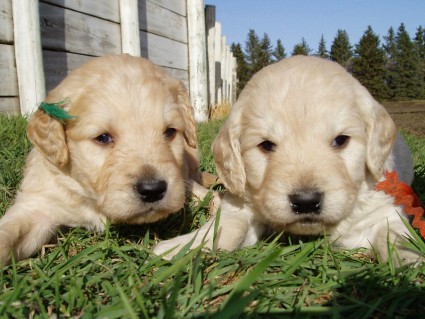 Goofy wears his ribbon high... he may just live up to his name. Pluto is a bit serious but loves his snuggles. 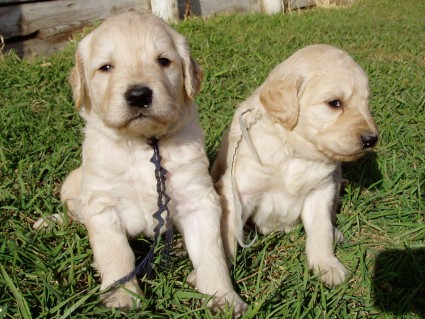 Chip questions why he had to have another picture taken... he is such a character! Dale is one of the smallest, quietest guys. 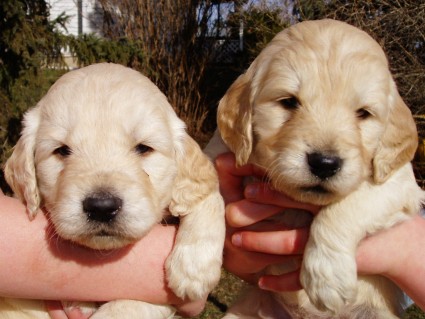 Tarzan is a cool, collected type of guy. Jane is a little fiesty, but fun. 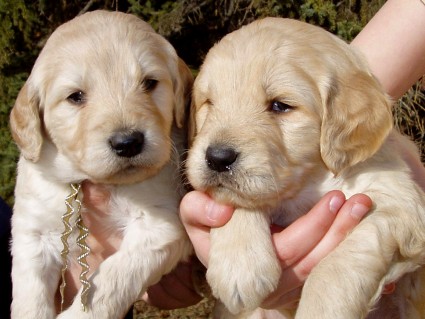 Mulan is a sweet, gentle, medium-sized girl. Mushu is not impressed with this photo shot but sure does like the extra attention from the kids!

These sleepy puppies made it a challenge to get some good shots. Their eyes are all just nicely opening... although not for the pictures.

Ariel seems to be unimpressed with Chip and Dale's antics

Mickey and Minnie snuggle up, while Tinker Bell dreams of stardust

Mulan and Mushu and their new side-kick, Pluto, dream of their next adventure in Mulan 3 1/2

Tarzan and Jane flake out after a wild jungle adventure, and Goofy wonders if he got in on the wrong set

Nia had them all on her own,
a real trooper was she.
When I first went to check her,
there were already three.

It took all of 6 hours,
to pop out those pups.
She took it in stride,
when we thought it too much!

The kids named them after
Disney characters of choice:
Mickey and Minnie, Tarzan and Jane,
what would Nia choose if she had a voice?

I wonder which will be a Memory Aide dog?
Who will live in Winnipeg?
Will they stay close or fly far away?
Just keep in touch is what I beg. 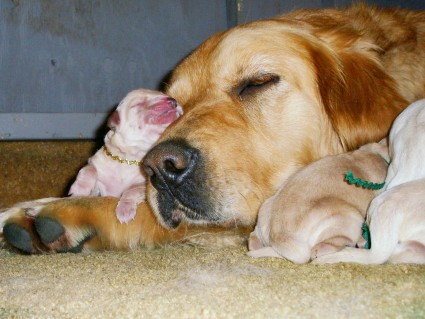 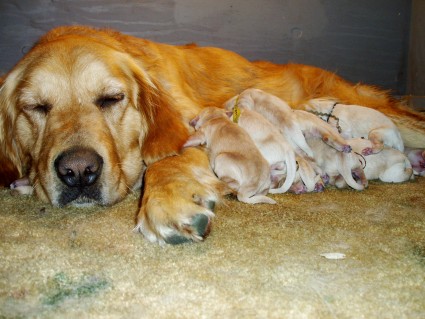 "Thank goodness I can rest!!!"