Chevy and Swede sure do make some amazing puppies together!! They're such a curious, active, and yet chilled bunch of puppies!! As soon as their eyes opened at 2 weeks old, they started wandering out of their whelping box (some litters don’t start venturing out until they're 4 weeks old)! As their personalities develop and grow we'll see lots of interesting changes in them.

My guess weights for this litter are from 30-60 lbs. They have a good variety of sizes and coats. The vet check will be on July 5th and folks will start choosing which pup they'll take home after that. The pups can go home after July 17.

I have one spot available for this litter at this time. See how our adoption process works on FAQ. Please contact me if you're interested in this litter.

Tux went home earlier than his littermates. He got laid on a few weeks ago and died. Poor Chevy felt so bad, my heart broke with hers. She certainly has her paws full looking after all those pups and is doing an amazing job with them! I can not imagine looking after all those babies at once!! She is very patient!! We make sure she gets her breaks and goes for runs with the quad to get a well deserved mama break! 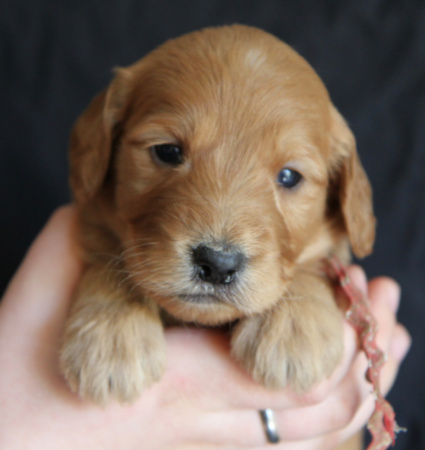 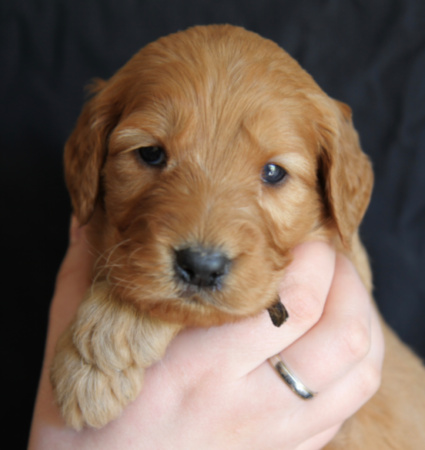 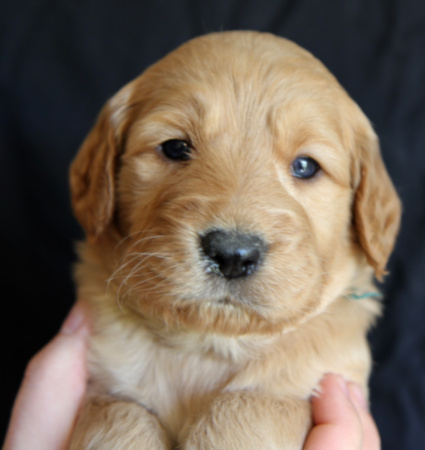 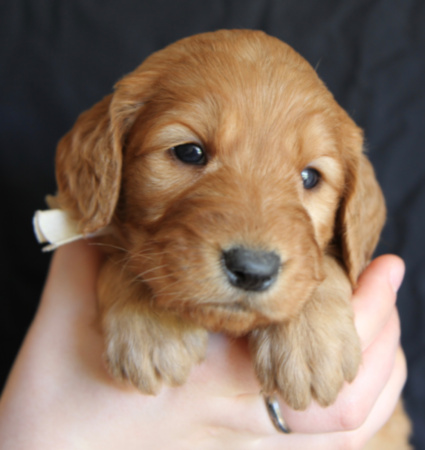 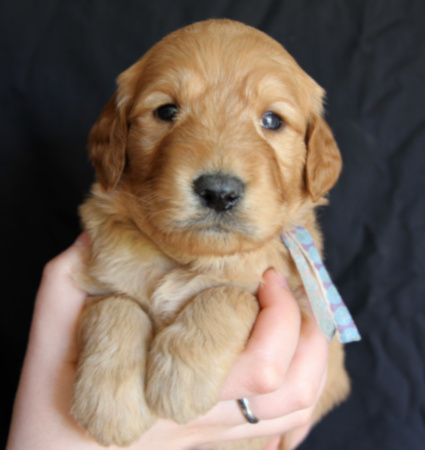 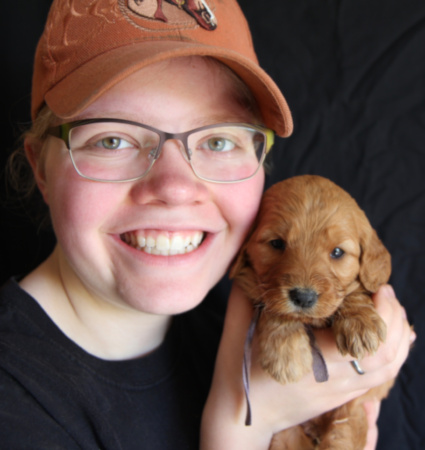 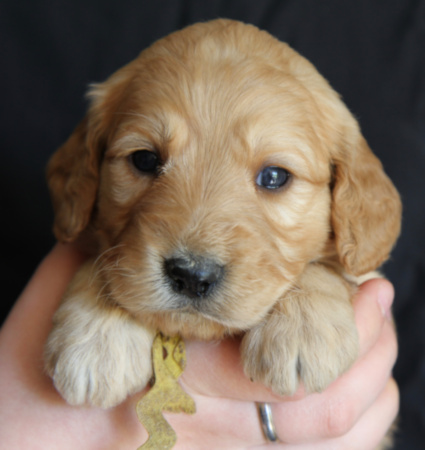 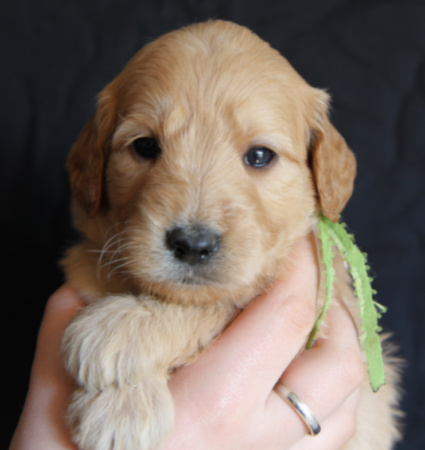 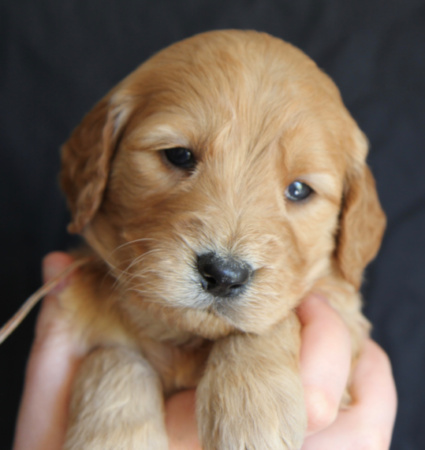 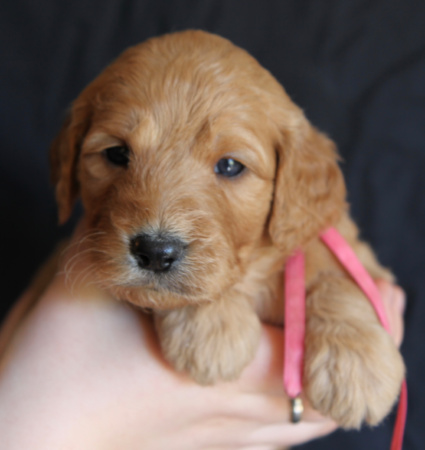 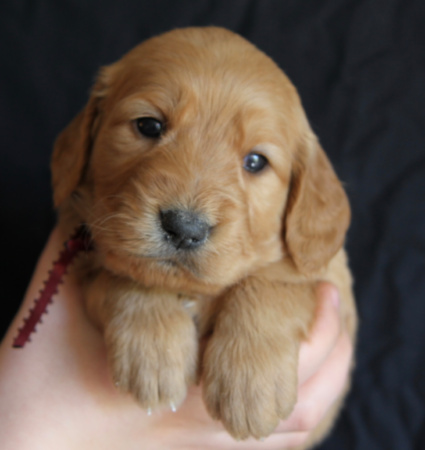 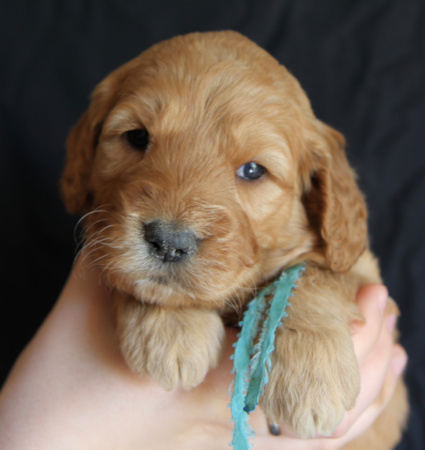 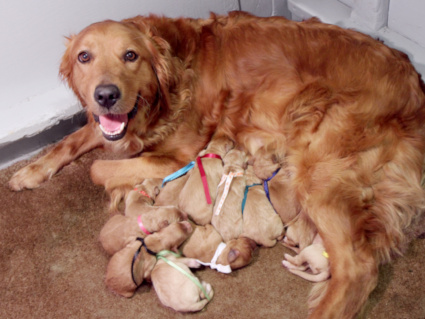 Chevy and Swede are happy to announce a huge litter of 13 F1 medium to large goldendoodle pups born on Victoria Day!

I knew Chevy was labouring that morning, but she really wanted to go for a run with the quad. I went very slowly and then convinced her to ride along with me side by side. She ended up being very happy with that! lol

At noon I was called to the field to help harvest part of last year’s crop which we had not been able to take off until now... so I gave her a big hug. I knew she was experienced and would do well on her own, but I still had my kids make sure to check on her. I received several texts with updates, and I could hardly believe that at the end of the day there were 13.They're very similar in size (no scrawny ones) and all seem to be thriving very well.

This has been a very busy time for us. Between seeding and harvesting, we've used every piece of machinery we have just in this week! This weekend my youngest daughter, Sara is graduating from High School and the following weekend, my oldest daughter, Emily is getting married. Because there were so many pups we decided to split the theme with Grad and Wedding terms.

The boys are Groom, Pastor, Tux and FIL, (Father in law). The girls are Bride, Cupcake, Grad, Hairdo, MC, MIL (Mother in law), Speech, Tassel and Vow. These pups can go home on or after July 17th and choosing for this litter will likely happen around July 5-8.

With all these pups, I do have availability in this litter!! If you're interested, please read through FAQ and submit your application.